A new appointment with PONTASSIEVE | A MUSICAL MAP 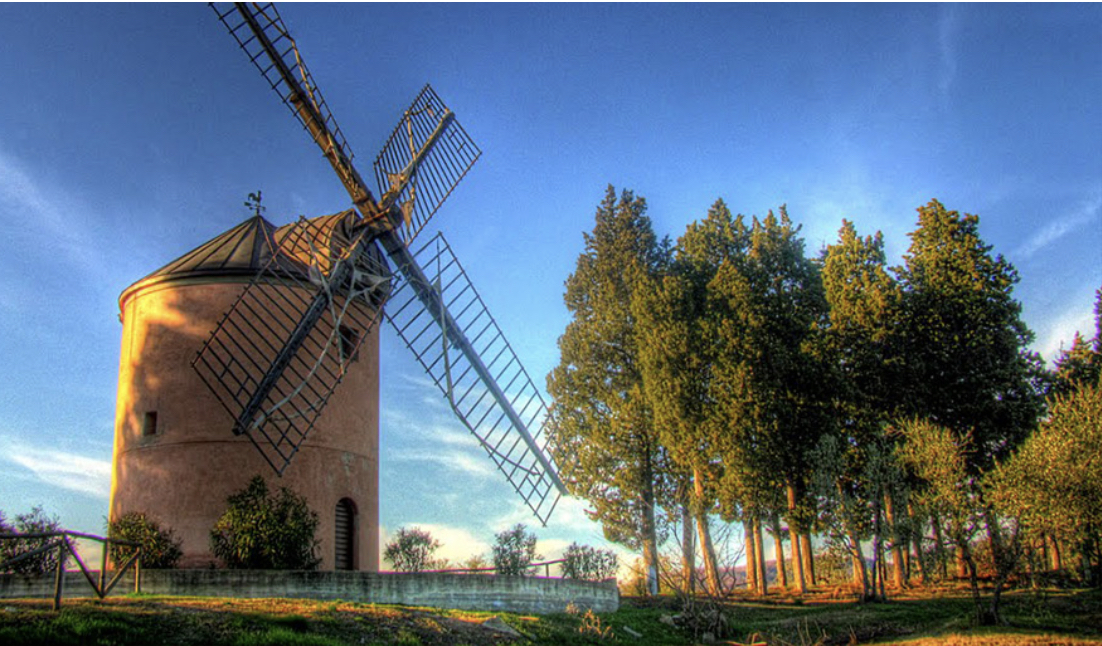 In the "a musical map" project the NovAntiqua artists make you discover attractive sites in Pontassieve, a small town located in the countryside near Florence.
---
DOMENICO GABRIELLI (1659-1690)
Ricercare Primo from Ricercari, canone e sonate per violoncello (1689)

MULINO A VENTO
The windmill in Monterifrassine stands on a crest at a crossing of a group of hills. It was built in the first half of the 19th century, restored in 2000 and put into operation thanks to the support of the Municipality of Pontassieve with the EU partnership and the engineers and experts from Italy, Holland and Germany. The careful and complete restoration of the windmill, achieved in only one year, was based on the restoration of the preserved elements and the research on other existing “tower” windmills. The internal part of the windmill is a fascinating “Leonardo da Vinci machine”.
The windmill is property of the Lavacchio Farm, an organic farm situated on top of the Chianti-Rufina hills, offering unique accomodation possibilities, surrounded by vineyards and olive groves, with stunning views and only 18 km. from Florence

DOMENICO GABRIELLI
Gabrielli, known also with the nickname "Mingain dal viulunzeel" ("Dominic of the cello") is especially notable as the composer of some of the earliest attested works for solo cello.
Born in Bologna, where he worked  for the cathedral of San Petronio and for the Accademia Filarmonica of Bologna, he has also been employed in Modena, at the court of Duke Francesco II d'Este of Modena.

AUGUSTO GASBARRI
Since 2014 Augusto Gasbarri is the Principal Cello of the Orchestra della Toscana, before that he was cello tutti in the Orchestra of the Teatro Regio in Turin and he collaborated with the Orchestra of the Accademia Nazionale di Santa Cecilia in Rome, the Camerata Salzburg, I Solisti Aquilani and the Orchestra Mozart conducted by C. Abbado.
In 2014,  in order to give expression to his enthusiasm for chamber music, he founded the Vox Piano Trio with Irene Novi (piano) and Clarice Curradi (viola). His collaboration with Ensemble Alraune is also very intense, mainly for concerts, but they recently recorded the fifth volume of a CD series dedicated to music censured by totalitarian regimes "Music and Regime" and "Quartetti Concertanti op.21 by G.Cambini" for NovAntiqua Records.
He was born in Chieti, and studied with Massimo Magri at the  Conservatory "L. D'Annunzio" in Pescara where he graduated with honors. He then continued his studies at the Universität Mozarteum in Salzburg with Enrico Bronzi. In 2017 he attended chamber music masterclasses with the Trio di Parma and the course Baroque Cello and Baroque Practices with B. Hoffmann at the Scuola di Musica di Fiesole.
From 2002 to 2004 he was a member of the Italian Youth Orchestra where he met P. Farulli, B.Baraz, M. Zigante, A. Nannoni.
His musical development was further influenced by musicians he met at the ECMA: H. Beyerle, S. Metz, P. Cropper, J. Meissl, E. Höbarth, A. Bylsma, and G. Gnocchi and S. Cerrato, who he met at the Piano Academy of Imola "Incontri col Maestro".

NA41 | Strues
The Vinyl with Anna Fusek & Ensemble Alraune. Strues was the Latin term that defined an accumulation, a stratification, an overlap, it was the name of a sacrificial cake but also the future of the verb to build.

NA17 | Tuscania
First world recording of String Quartets op.21 by Giuseppe Maria Cambini.
On the CD also the Duo for Viola and Violoncello by Luigi Boccherini.

NA29 | Musica & Regime 3
World premiere recording of the Sextet by Tyberg and vocal music for mezzoprano and strings by Zemlinsky and Ullmann.