Tomorrow at 5 p.m. a new episode of PONTASSIEVE | A MUSICAL MAP available on our YouTube channel. 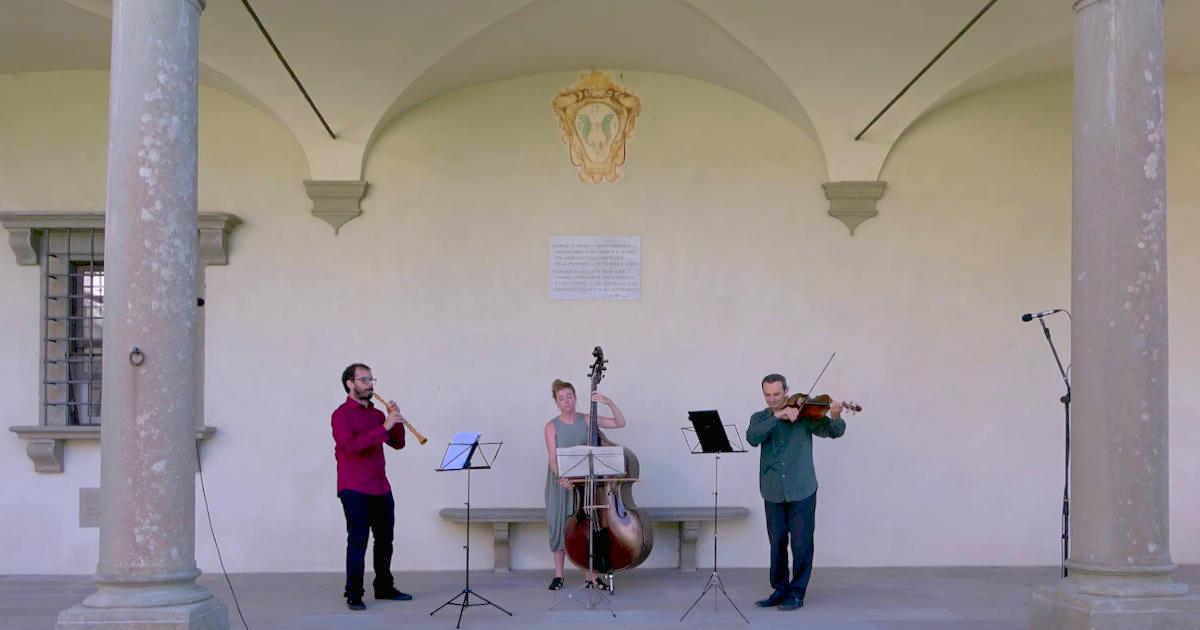 A project of NovAntiqua records and Giotto in Musica to enhance landscape and historical beauties of the Comune di Pontassieve (Tuscany).

In the "a musical map" project the NovAntiqua artists make you discover attractive sites in Pontassieve, a small town located in the countryside near Florence.

The Sanctuary of Madonna delle Grazie, or of Madonna del Sasso, in Pontassieve is situated in a panoramic location, like a terrace which looks out onto Valdarno and Val di Sieve and it is a worship building which has its roots in ancient times.
In the late Middle Ages some caves in the area were chosen as place of hermitage and it was near one of the tabernacles, built in the era of hermits, that a shepherdess saw the Blessed Virgins everal times, between 1484 and 1485. The worship arising from that event led first to the construction of a small oratory and then, following its rising fame, to the construction of an even bigger building between the end of the 15th century and the beginning of the 16th century. Together they were then enclosed at the end of the 16th and 17th centuries and the beautiful loggia was added to protect the pilgrims.
Inside the church, you can admire the large high altar from around 1504, thought to be by a pupil of Sansovino, with two small niches to the sides with two wooden statues depicting the prophet Eletta Ricovera (one of the shepherdesses) and her father on top, who was miraculously healed upon the first apparition. On top of the altar is the stone on which legend says the shepherdess first saw the Virgin Mary.
Among the works kept in the church there the Madonna with Saints by Vignali (1621), the Passage of St. Joseph by an unknown painter from the 17th century, while on the right there is a St. Isadore by an anonymous painter from the 17th century and a Crucifixion by Velio (1600).
The inside staircase leads to the lower oratory, with the venerated imaged of Madonna delle Grazie, the Tabernacle of the Hermit with the rock of apparitions, the hermit’s well and the cell of Sant’Andrea.

Johann Michael Haydn, the younger brother of Joseph Haydn, was born in Rohrau, a village that at that time stood on the border with Hungary. Neither parent could read music; however, his father Mathias was an enthusiastic folk musician, who during the journeyman period of his career had taught himself to play the harp.
Michael went to Vienna at the age of eight, his early professional career path being paved by his older brother Joseph, whose skillful singing had landed him a position as a boy soprano in the St. Stephen's Cathedral, Vienna. By his 12th birthday he was earning extra money as a substitute organist at the cathedral and had, reportedly, performed preludes and fantasies of his own composition.
In 1760 Michael was appointed concertmaster at Großwardein (today Oradea) and in 1762 at Salzburg, where he remained for 44 years, during which he wrote over 360 compositions.
Michael Haydn was acquainted with Leopold and Wolfgang Amadeus Mozart, who held his work in high esteem. Also Joseph Haydn regarded his brother's music highly, to the point of feeling Michael's religious works were superior to his own.
In 1802 Michael Haydn was "offered lucrative and honourable positions" by "the Grand Duke of Tuscany", but in the end chose to stay in Salzburg.

Alraune is an ensemble founded by Mario Sollazzo and Stefano Zanobini with the aim of bringing together in a single group the eclectic characteristics of the two founders. Founded on a group of five musicians in addition to other collaborators for individual projects, the ensemble has as its guiding principles a great openness to a wide repertoire, the absolute attention to historical informed performance, the study of the sources, long-term and multidisciplinary projects. This brings to a natural interest in performing on original instruments and a very personal dimension of musical interpretation that is reflected in the formulation of the programs and in the interpretative line.
Alraune’s work follows two main lines: the performance on original period instruments and research projects guided by a humanistic and political principle.