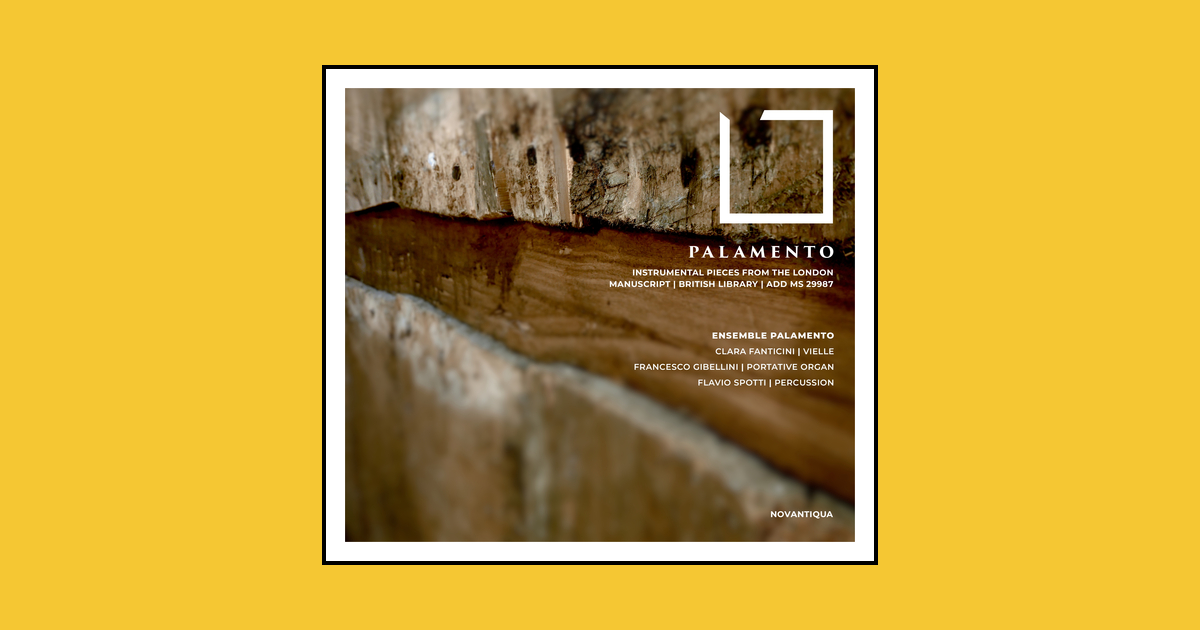 From the LONDON MANUSCRIPT, 15 Italian instrumental pieces of the XIV Century.

Manuscript Add.29987 (London, British Library, Additional 29987) is called the London Manuscript because it is kept at the British Library in London. However, in spite of the appellation, this volume contains music from 14th-century Italy and was, according to several scholars, written in central Italy, most probably in Umbria or Florence.

Little is known about the history of this manuscript, just as it is mysterious why it is now in London.

The London Manuscript, similarly to the many songbooks that circulated in the Middle Ages, is an anthology of ballads and madrigals copied from various hands and with an evident stratification of time. The handwriting is often difficult to read due to damage and erasures, which have condemned the volume to being among the least consulted by musicologists and performers.

However, there is one particularity that makes this text extremely interesting: it contains 15 instrumental pieces. This makes it an extremely rare source of medieval non-vocal music, the oldest known today in the Italian context.

The only ancient text comparable to the London Manuscript (i.e. with such a significant section of instrumental pieces) is the Chansonnier du Roi (BNF fr. 844), a 13th-century French volume that also contains 11 estampies.

The scarce evidence of instrumental music does not necessarily mean that this genre was unusual in the Middle Ages: instruments were certainly employed within vocal compositions as doubles or substitutes for voices; they were probably also used in instrumental-only pieces, but this music was not fixed on paper, being probably only improvised or handed down orally.

Hence, no copious or precise evidence of this type of music has come down to us.

The formal and stylistic novelty of the instrumental pieces of the London Manuscript with respect to the already mentioned estampies of the Chansonnier du Roi is very evident: we find ourselves in front of compositions of wide extension, with considerable rhythmic complexity and requiring marked technical skills from the performer.

The 15 instrumental pieces of 'London' belong to different formal types.

The most widespread piece is the istampitta (there are 8 of them), a direct evolution of the estampie of the French songbook.

The istampitta is formally divided into a few parti (musical melodies), each of which is repeated twice, alternating different phrase endings (open and closed). While in the Chansonnier du Roi this structure is absolutely linear and the partes are quite distinct from each other, in "London" the structure becomes more complicated: the different partes are grafted onto each other in a complex way, so much that the performer has to find his way through a dense network of signs that refer from one point to another on the page.

There are also four saltarellos and a trotto, shorter pieces which, as the title suggests, have a rhythmic development and a lively character. They too have a structure with a division in partes and with phrase endings that are alternately open (to repeat the part just performed) and closed (to move on to the next part).

The last genre we find is the pair of lamento and rotta: this is a pair of pieces in which a slow first part alternates with a faster second part, having a common melodic matrix; also in this case we find the division into parti with open and closed endings.

All 15 pieces share a distinct rhythmic liveliness and unpredictable melodies, elements so energetic and vigorous that make them unexpectedly modern.

Much could be said about the titles of these compositions: some refer to people's names (Tristano, Isabella, Manfredina), others suggest a geographical location (Tre fontane), others remind ideological themes or states of mind (Chominciamento di gioia, Principio di virtù), others still have a mysterious title (In Pro, Belicha, Ghaetta) or even dubious calligraphic corrections (Palamento could be revised to Parlamento). Various hypotheses have been made about these enigmatic names, trying to link the titles to historical facts and figures, but this is not the place to explore these theories.

Leaving aside, therefore, the nature of the titles, let us dwell instead on how relevant their actual presence in "London" is: this fact (once again) is different from the Chansonnier du Roi, where the dances are generically entitled Dançe, Dançe Royal or Estampie Royal with a progressive ordinal number.

It is not known in what contexts these pieces were performed, nor whether they are a collection copied from other lost manuscripts or a set of original compositions (by one or more composers). It is assumed that these pieces were intended for dance and that, since they were not suitable for group choreography, they were danced by professional soloists.

It should be noted that in this recording only some of the istampitte are performed in their entirety, due to the excessive length they would reach.

It is very common for pieces contained in a medieval manuscript to be found copied in other contemporary volumes. However, these 15 compositions are unica, i.e. they are found only in "London" and there is no trace of them in other codices. While this makes it an even more valuable and historically relevant collection, it also prevents a comparison between several sources, thus accentuating the difficulties of a critical transcription in modern notation. This fact has often discouraged scholars from deciphering this music, especially since, as mentioned above, the handwriting is not very clear and is rendered non-linear by various erasures and stains on the paper. There are also obvious typos that need to be resolved in order to create a meaningful musical performance.

It is precisely because of the scarcity of recent or reliable critical editions that Ensemble Palamento has undertaken an in-depth study of these dances: Clara Fanticini, the ensemble's viellist, has personally devoted herself to writing a critical version from 14th-century neumatic notation to modern notation. The result is a work that, while being musicologically correct, proposes solutions that favour the musical language aspect. In fact, once the transcription had been completed, the entire ensemble collaborated by field-testing in a practical manner the various plausible options in the event of doubts or misprints: it was a question of sifting through the possibilities and seeking coherence within the language of these pieces (which is very particular and new being the first example of instrumental literature).